Inspired by natural hexagonal honeycombs. Invented an aluminum honeycomb panel. The aluminum honeycomb panel is a honeycomb sandwich panel with a honeycomb structure as its core. The unique honeycomb structure makes it lighter than other materials in the same volume and has excellent stiffness and overall stability. With the advantages of sound insulation and thermal insulation. Aluminum alloys are neither radioactive nor volatile. They can be fully recycled, saving resources and energy, and minimizing environmental pollution. This makes the honeycomb aluminum plate a new type of energy-saving, environmentally friendly and healthy material. 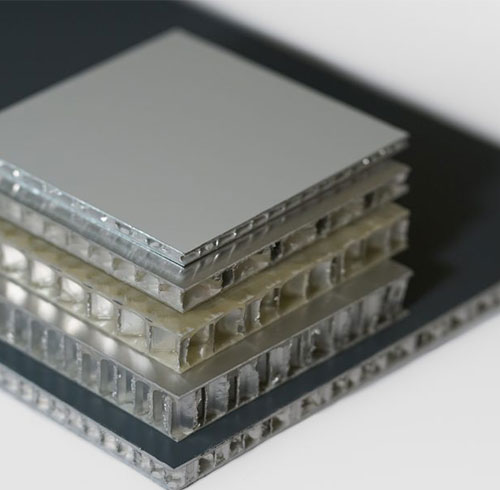 Aluminum honeycomb panels have many advantages:

According to mechanical analysis, the honeycomb panels are connected to each other like I-beams. The skin panel bears flat loads like I-steel flanges. The honeycomb core functions like an I-beam can withstand shear stresses and connects and supports two skin panels. However, unlike I-beams, the honeycomb core is not thin ribs, but dense ribs. The core layer is bonded to the entire surface of the board. The height of the core layer is much larger than the thickness of the skin, which doubles the moment of inertia of the section, improves overall stability, and increases the overall stiffness.

When the honeycomb panel is subjected to external impact, the impact force can be converted into plastic deformation energy of the honeycomb core, so that the impact energy can be effectively absorbed. Through the self-dropping ball impact test on the aluminum honeycomb panel, by checking the depth of the dented area and the impact portion, there were no cracks. absorb. The damping effect is good.